The continued global spread of COVID-19 now represents the worst worst-case scenario. It appears that non-pharmaceutical intervention (NPI) methods will now be employed to supress the spread of the virus in all major jurisdictions, and at least until a vaccine has been developed. As a result, there will be significant economic disruption and earlier fears, initially dismissed in some quarters as fake news, have become a fact of life. However, in our view now is not the time to panic out of equity portfolios and investors should focus on the likely evolution of this healthcare crisis over the next 18m.

The declines to date in global equity markets has been severe, and especially so in continental Europe and the UK. Major indices have fallen by well over 30% year to date and mid-cap UK equities have recorded declines of 40%. This means forward price/book multiples have fallen to levels not seen since the 2008 crisis. Where liquidity was poor prior to the coronavirus epidemic, price moves in specific stocks have often been more extreme.

Exhibit 1: Global market declines in 2020 will be recorded in stock market history 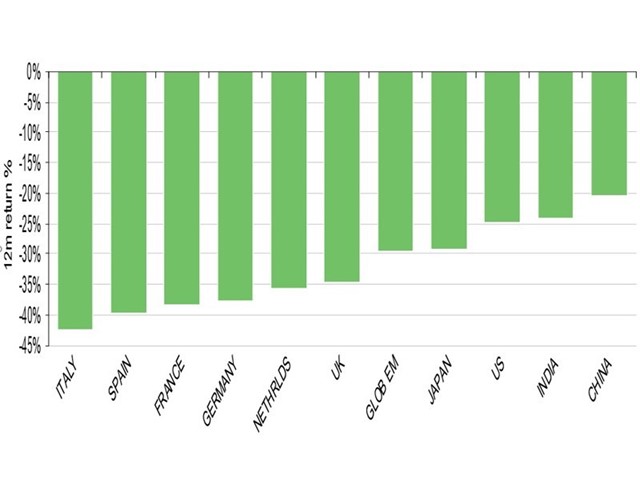 Based on China’s experience, NPIs can be effective but also severely impact the economy in the short-run. During the first two months of this year, China’s retail sales and fixed asset investment have declined by more than 20%. Nevertheless, the continued low numbers of new infections in the country in recent weeks suggests that the COVID-19 impact may still be of relatively short duration.

Notwithstanding China’s success in supressing the virus, in the absence of herd immunity NPI measures can only be lifted gradually and there remains the risk of repeated stop/start interventions until a vaccine or better treatment options are developed. One factor which investors should focus attention on is any increasing availability and prevalence of testing.

Improved availability of COVID-19 testing should facilitate much more specific NPIs, such as tracing and isolation of only known patients and contacts rather than entire cities or nations. This could dramatically reduce the economic cost of controlling the epidemic ahead of a new vaccine, which governments have indicated may be available by 2021.

We believe the first two phases of this biological crisis were denial followed by panic. These phases were staggered in time for participants in financial markets first and central banks second, followed by governments and the general population. Nobody is now in denial about the size of the task ahead and the time for panic has passed in our view.

Investors are modelling the extent and duration of the necessary control measures to assess the impact on GDP and corporate profits. Central banks have shifted to implementing much looser monetary policy combined with a long list of operations aimed at ensuring the flow of credit within the economy and in particular to the corporate sector, as the plumbing of the financial system is stressed in a manner similar to 2008. The role of central banks at present is not to try to stimulate demand but to ensure that financial markets continue to function as normally as possible.

Governments have realised that substantial fiscal policy easing will be required to ensure that confidence in the economy and corporate sector will be retained during a period of lockdowns more akin to wartime conditions. We note there appears to have been broad political acceptance that such fiscal policies are necessary on a global basis to insulate both people and sectors most affected by the steps taken to control the epidemic. As a result, we believe markets should welcome the most recent initiatives offered by the US and UK administrations.

The actual economic impact of the NPIs is difficult to model as there is no modern precedent for a global lockdown. We view China’s experience as instructive and the contraction of the private sector will require a substantive offsetting additional government spending during 2020 to avoid both national and global recessions. The recent initiative of dropping “helicopter money” on the US population has headline appeal and is different from a tax cut as it represents immediate financial relief and would be particularly highly valued by lower income groups more exposed to the economic impact of the efforts to control COVID-19.

We believe from a healthcare perspective the first focus will be on ensuring sufficient availability of fully equipped intensive care facilities to lower the fatality rate within the coming first wave of infections. At the same time, very recent studies and WHO guidelines highlight the benefits of much broader testing and rigorous contact tracing and isolation.

Progress in this regard will be key to the removal of the most intrusive and economically costly forms of social distancing in our view. By increasing the specificity of the NPIs, it may be possible to hold down infection rates while allowing the economy to operate much closer to full capacity. A tolerable interim phase of NPIs ahead of a vaccine in 2021 would restore confidence in the economic outlook and calm financial markets.

In view of the relatively modest total number of deaths being aimed for in developed markets and the likelihood of progressively more effective and less economically damaging control measures being implemented during the year, the enormous declines in UK and European equity markets to date suggest that market valuations may have even overshot to the downside. 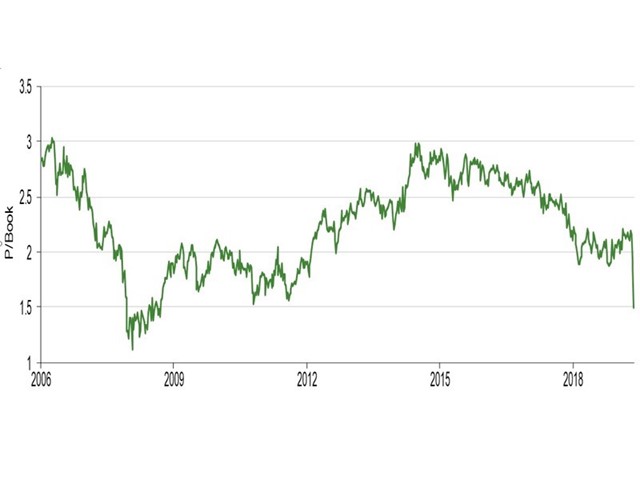 The median price/book multiple of UK large caps is currently just 1.5x – a level not seen since 2009. A UK large-cap dividend yield of over 6.5% would also suggest that unless there is a calamitous and permanent decrease in the dividend-paying capacity of UK stocks, there is a case for considering the market undervalued in the context of 10y gilts yielding only 0.4%.

Within Europe, the valuation picture is similar following a decline of 38% from the market high recorded only mid-February which leaves the median price/book multiple at 1.5x and close to the lows seen only during the worst phase of the financial crisis of 2008. 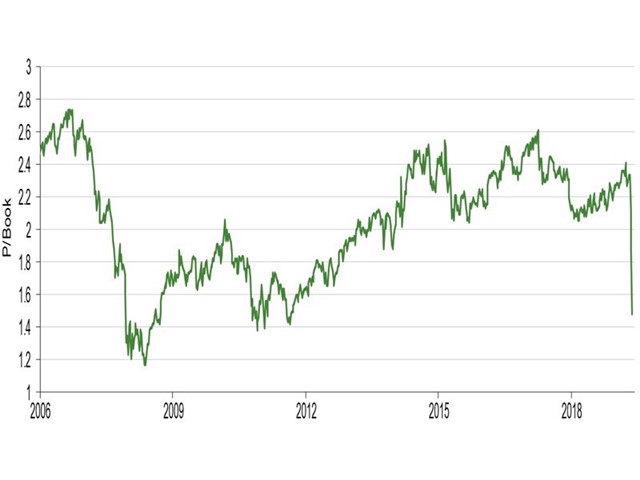 Many equity investors will still be spooked by the red-flashing warning signals from credit markets, which gained favour as measures of financial market stress during 2008. Our observation is that in a distressed market all assets become correlated and rather than offering a separate signal, credit markets show that risk premia across financial markets are broadly elevated, as investors indiscriminately try to raise cash.

We believe a reduction in uncertainty will occur as investors become better able to outline the shape of the downturn and the consequent recovery, potentially as we have outlined. Furthermore, specific instances of credit market stress are also being rapidly targeted by central bank policies around the globe as corporate credit risk becomes in part underwritten by the state.

We therefore shift to a neutral position (from cautious) on equity markets primarily on valuation grounds but also with view that time will demonstrate both control and more importantly increasingly economically efficient control through widespread testing - and as a result more specific patient isolation policies evolving during H120. This would mitigate the economic damage of the epidemic. Monetary and fiscal measures will have to provide sufficient support during this interim phase of the crisis and ultimately investors will look towards a vaccine becoming available by 2021.

Nevertheless, we must also respect that many investors will struggle with the concept of adding risk to portfolios with such uncertainty and market volatility still ahead.

17 Mar 2020
Load More
We use cookies (and equivalent technologies) to collect and analyse information on our site's performance and to enable the site to function. Cookies also allow us and third parties to tailor the ads you see when you visit our site and other third party websites in the same online network, including social networks. By clicking 'Agree', you agree to these uses of cookies. If you do not agree or if you would like more information, you can manage your cookie preferences by clicking the link provided.
Manage Cookie Preferences
adding all to cart
File added to media cart.